First, I am going to start this post with a few exciting seasonal updates with our garden.

The first is…I finally pruned our grape vines! They were already existing when we bought the house, and in desperate need of pruning. I estimate that it has been at least 3-4 years since they were last pruned. When we bought the house, we were in escrow during the time they should have been pruned. I was already sneaking in earth worms and compost…pruning things before the house was officially ours might have been a bit strange. 🙂 Then last year, they got ignored again while everything was chaos with my pregnancy bed rest. I was pretty happy to finally be able to get rid of some of the excess growth. We wanted to replace the fence that they grow on, but I have a feeling that will have to wait until next year since we are in the middle of a major project in the back, and the new leaves have already started coming in.

The first of this season’s grape leaves! 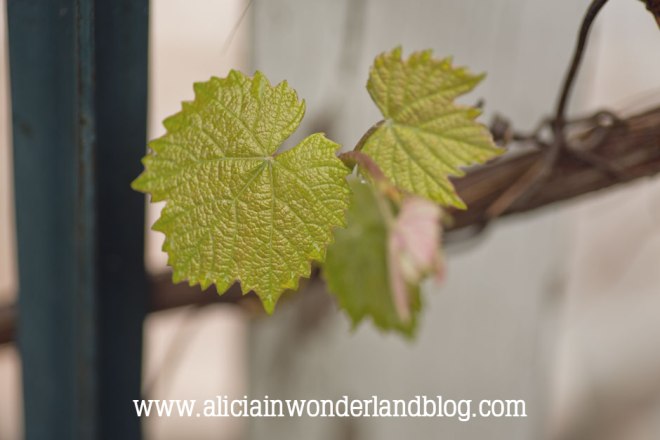 I finally was able to prune our mature peach tree as well! Also below, all of our citrus has been sprouting blossoms like crazy ever since I fed them with a bunch of my homemade compost. 🙂

This is one that I am very excited about…we are going to be getting our first home grown cherries! I planted two dwarf cherry trees, and it took a lot of research to find out which varieties of cherry trees will actually produce fruit here in Southern California. Since we don’t get very cold in the winter, most varieties of cherries won’t produce fruit here. Our neighbor paid his landscaper to plant some cherry trees in their yard a few years back, and the landscaper keeps making excuses why the trees haven’t produced any fruit. I bet our neighbor that my trees would make fruit before his ever do (since his are the wrong type for producing fruit in this climate). I’m going to be so proud when these little cherries are ready to pick. 🙂

Since our backyard and normal vegetable area is about to undergo a huge makeover, I planted a bunch of lettuces in one of our wine barrels. Time for some salads! 🙂

I also planted a ton of nasturtiums in flower pots since I love the way they look and I also love using the flowers in salads. I just think it is so beautiful when new life springs up out of the dirt.

Finally, I get to the backyard project! Recently, we debated doing an addition to our house, to enlarge the bedrooms a bit. Our bedrooms are all pretty tiny. When all of the estimates told us we would probably have to spend somewhere in the $200,000 range just to add on an additional 500 square feet of living space, we decided it was not a project we plan to pursue. Our bedrooms are small and cozy and that is fine. We recently watched Once Upon a Time in Wonderland and liked the way the genie had his bottle decorated anyway! Our bedrooms feel a bit like a genie bottle at times since they are so small, but it does not make sense to spend so much just to make them a bit bigger. It definitely would not increase the value of the house that much. Instead of adding onto the bedrooms, we decided to create our dream backyard and our ideal outdoor living space. We could have gotten a house with bigger bedrooms elsewhere, but part of why we picked this house was because the weather is nice here (5 miles from the ocean) and we have a lot of outdoor space.

Originally, we planned to start on this project sooner, but the recent rain storm here in Southern California delayed our start a bit. Our three year wedding anniversary was on Tuesday, and we decided that we wanted to celebrate our anniversary by really digging into this project, literally. 🙂 We are both really excited about what we have planned for this area. It is all going to be grass free, with drought resistant plants. There are going to be a bunch of different shaded seating areas for entertaining. To start, my husband rented a sod cutter to remove all of the old grass (it was mostly dead and weeds anyway).

Then we went on a treasure hunt for a bunch of garden accents. There are still a bunch of things that we are looking for, but we are really excited about some of the things we have found so far! 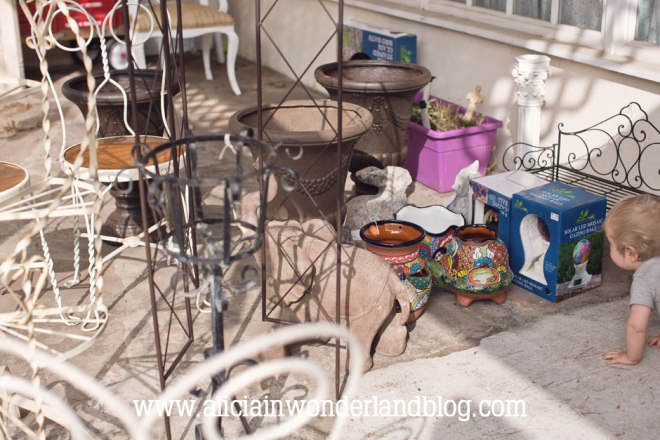 E likes these hand painted planters that I found. 🙂

We are trying to get this yard finished up in time for E to have a birthday party. I apologize for those who know me…we may be a bit M.I.A. for the next few weeks while we work on all of this. I am going to be blogging our progress though as the project continues! Coming up soon, I will also be writing about my first experience with wine tasting! 🙂